25th of February 2012 will be well remembered by almost 150 young and a bit older practitioners of Shinkyokushinkai Karate. Sensei Valeri Dimitrov, multimedalist of European and World Championships, and shihan Georgi Popov, trainer and the head of technical training at Bulgarian Federation of Shinkyokushin Karate, arrived to Warsaw, invited by sensei Tomasz Basiak and sensei Jacek Baranowski.

The seminar consisted of one training for kids and two for adults. All of them were strictly focused on kumite. The participants were divided into two groups, each led by one of our guests. That way, both the group consisting of fighters, black and brown belts as well as the group of those who do not participate in tournaments, had a chance to practice with each of our guests.

Sensei Valeri presented combinations and techniques he most often uses when fighting. He demonstrated the right way of performing gedan kakato geri, also known as “Valeri kick”, then he discussed fighting tactics and the way of leading attacks. Sensei explained how to divert the opponent’s attention to efficiently perform techniques, focusing on the opponent’s trunk. Participants also had an opportunity to ask sensei questions about fighting in general and specific techniques in particular.

The trainings led by shihan Popov covered work on equipment, and focused on speed and the way of moving during fights. Shihan showed exercises used by Bulgarian fighters, paying attention to the right hips movement and the correct performance of each of the techniques. He stressed efficiency aspects of the movement, particularly important in the context of economy of fight. Apart from these, shihan showed how important the techniques performed in a close distance are and how efficient tettsui and hiji uchi may be. At the end of the training, shihan also dedicated some time to hardening specific body parts. The training surely gave everyone a flavour of Bulgarian school of shinkyokushinkai karate.

The seminar was also a scene for a pleasant event – one of the members of Tomasz Basiak Shinkyokushinkai Team, a fighter and trainer Łukasz Sapijaszko has been handed a black belt and a certificate for the 3rd dan. We all rejoice this accomplishment and heartily congratulate. Osu!

It is also worth mentioning thanks to the organisers’ usual hospitality, for the participants had an opportunity to have a warm meal, snacks and soft drinks between the trainings.

At the end of the seminar the organisers – sensei Tomasz Basiak and sensei Jacek Baranowski – presented our guests with a gift to commemorate their visit. Shihan Popov declared his willingness to build a stronger relationship with Polish Shinkyokyshinkai Organisation through participation in championships, and through organising joint camps and seminars. After such a declaration, we can be sure of a long and fruitful co-operation as well as development in the spirit of Shinkyokushinkai. Osu!

The organisers would also like to thank Ewa and Todor, who supported us with Bulgarian translation – an enormous help. 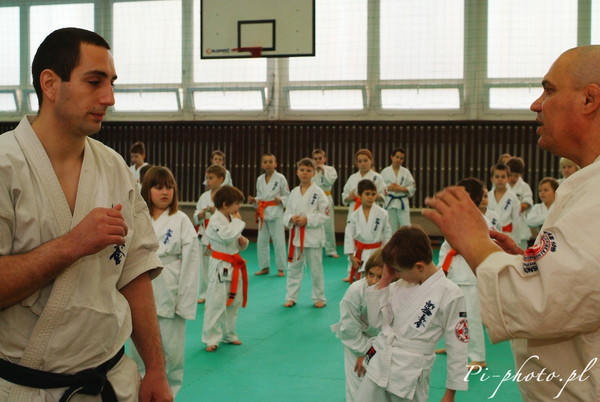 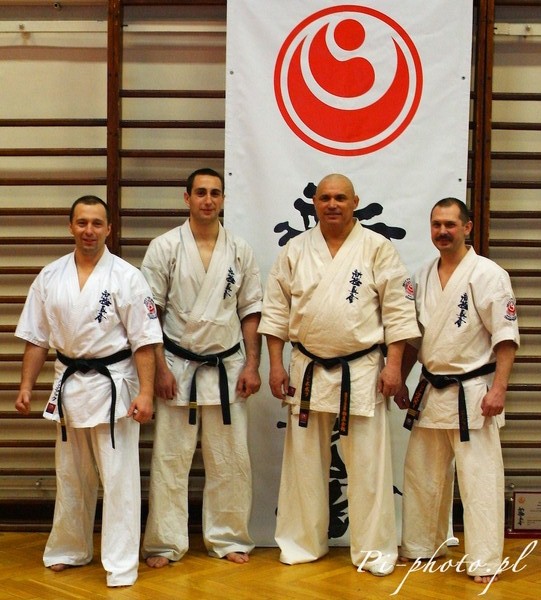 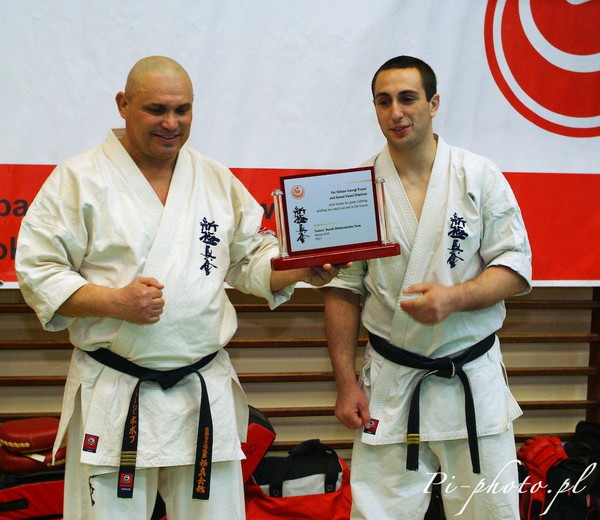